A New Clockworks Update is Coming!

Seasons is a new and exciting addition to Clockworks FlyFF! Seasons provide an opportunity to start fresh and relive the exciting initial progression you know and love so much. A unique incentive to Seasons is the enjoyment of community, progression and competition! Every player has an opportunity to collect exclusive rewards, and progress as much as possible.

With every Season comes new lands to explore, items to collect, achievements to complete, dungeons to raid, people to befriend and compete with - and most importantly, exciting and professionally crafted content!

None of your efforts are wasted as with the end of every Season, your characters levels, items, penya, everything,  is rolled over onto the original Clockworks Server, where they can be enjoyed at any time! 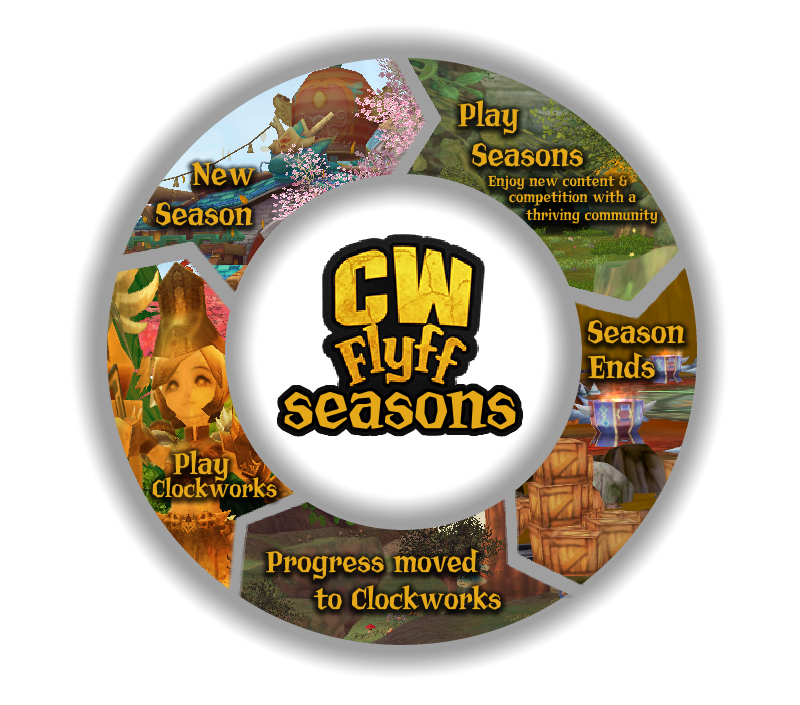 Achievements offer nearly a thousand tasks for you to complete! Achievements are categorised into a full beginner guide, farming monsters, PvP and PvE challenges and much, much more! Each achievement may also reward you with exclusive items, such as badges, cosmetics, cloaks, loot boxes, titles and experience.

Tiers are directly influenced by your Legend Score. Reaching each tier rewards you with a Seasonal box, which contains a cosmetic set, titles, badges, wings and more! These items change with each Season. For Season One, there are 6 Tiers: Bronze, Silver, Gold, Platinum, Diamond and Legend. You'll be able to check what Tier rewards are available in-game!

If you found one challenge a day too easy, there's now up to 3 challenges with an additional weekly challenge! This revamp also introduces our new chest market, where completing daily and weekly challenges allow for you to open chests that include powerful bounty!

With our Weapon Reroll system, every weapon is unique! Every attribute for each weapon has a chance to roll in a set range. Even if you drop an imperfect weapon, you can use the Reroll system to create the perfect weapon!

Version 2 allows for any weapon to be made perfect with dedication and a reasonable amount of time and investment. Say goodbye to only rerolling one stat and to random rerolls! We've significantly increased the odds of getting better effects, and introduced a sacrifice system where you can salvage other weapons to help perfect your weapon!

Trap the souls of monsters into your weapons to make them stronger than ever before! This update brings more balance to our unique upgrading system. A few cards may also show up from our new dungeon!

Angel Rank is a great way to obtain more power and skill, even after you've achieved max level. Gain up to 150 stats as you level to AR 100! It's a challenge only achieved by the most hardcore of adventurers.

Angel Rank is now integrated with the Achievements! Be rewarded for your hard work and dedication the right way - earning Legend Points and receiving exclusive, seasonal boxes for every 10 ranks.

Sentenced to the depths of Madrigal over a millennia ago, the forbidden God Hephaestus has opened a secret portal to Madrigal! This primal creator plans to enslave Madrigal with his army of Titans. Can you rise to the challenge and defeat him and his army? Defeating Hephaestus' dungeon and Titans brings almighty treasures of infinite power!

Auctions are an innovative feature served to help distribute items for Raid loot. Three of the many items obtained from these Raids are randomly auctioned between the group. There's no more worrying about who got what when you can bid for it!

A new monster mechanic comes with this update! No one likes dealing with bosses that randomly switch who they're attacking. It ends up killing your damage dealers and ruining your chances at some good loot! Tank AI is an advanced feature that ensures there's little switching between tanks and dealers, allowing for smoother dungeon runs. Bosses will now favour those with more health and stamina. Of course, we left a little chance they might switch, just to keep you on your toes.

Sorcerer's Exchange is an addition to the Collecting system, allowing for players to discover new material through mining and farming. These materials can be combined to create items such as Amplifications, Unbinds, powerful consumables and more! On release, the Sorcerer's Exchange will feature up to 10 items for you to create, with room for many more.

There's no need to leave your computer on all the time anymore! AFK Collectors do all the hard work for you. All you need to do is show up to collect your items from your helper or through the mail!

AFK Vendors should be FREE to ALL users! That's why we've added a new feature: players are now able to set up free AFK vendors for up to six hours at a time, indefinitely.

There's no panic in finding a guild anymore! Guild Leaders can now advertise their guilds for players to join and contribute! Gone are the days of having to wait for guildies to come online to invite you!

Guild Buffs are now much more revised and balanced. Enjoy leveling up your guild to 100 as a leader or member. Each quest item you donate brings you and your guild more power in both PvE and PvP!

Asmodan's is Clockwork FlyFF's version of the outdated Secret Room. Your task is to fight with your guild through nine challenging rooms, each one more difficult than the last! Each room contains a different layout with class-specific monsters. Your aim is to complete Asmodan's Trials with your guild as fast as you can each week - the top guilds will be rewarded graciously! Compete against players and guilds and become PvE Champions! You can attempt Asmodan's Trials once per hour with your guild.

Royal Rumble is a Free For All PvP game mode that runs continously throughout the week. Users are able to host matches and take part in heroic battles with up to ten players. Don't worry if you don't have amazing equipment to take part in such battles, as we provide it all for you! Join a match and all the equipment, awakenings, consumables, everything - will be provided for you! All you need to do is fight against players and earn prizes!

We know it's annoying to have to switch to our website to purchase items from the webshop with Clockwork Tokens and Vote Points. We've now made it much, much easier! You'll be able to see your CWT/VP balance directly from your character(s), along with sell, trade and buy with NPCs and players!

The Quick Switch feature removes the hassle of having to search through your inventory to change from PvE gear to PvP, from PvP to Tank..well, you get the point. It's annoying and takes so much time! The quick switch feature allows you to quickly change your armour, weapons, jewels, pets and more with just the click of a button!

Everyone needs to know who's the best, and who to strive to defeat. The Record Book displays information about the top players and their achievements, such as highest stats, most monsters killed, highest Legend Score and more! We're also proud to announce our speed running category, where players can race eachother in levels, dungeons and more. Start optimising your runs and equipment, maybe you'll get in the Record Books!

We all know the classic interface can get a bit intense to look at after hours of leveling and dungeon runs. With the current craze of Dark Mode, we decided it was time to hop on board! We currently support two new theme skins: Dark Mode Classic and Dark Gold!

Not only do you receive a chunk of Vote Points when you vote for our server, you also receive a Vote Buff! With every consecutive day your vote buff gets stronger and stronger! So get started on voting!

Everyone's familiar with FlyFF's old style of stat dice. It's boring and has the potential to destroy your character! This new and exciting version features an easy to use GUI that allows for a fairer and more interactive experience. Unlock Stat Dice through leveling and completing achievements! You'll now be in charge of each individual stat dice, having an option to reroll it at any time - increasing your characters power with each new bonus!

Forget pet feed and dying pets! The Clockworks way of leveling pets is through killing monsters. With each kill brings experience to your pet, it's up to you to train it to perfection!

At Clockworks FlyFF we're all about improving your quality of life! We've made hundreds of subtle yet drastic changes to the game, from awakening to inventory updates to making it faster for you to login! Our changes ensure your adventure through Madrigal is as smooth and comfortable as possible.