Star Weapon Upgrade
- We are introducing a new form of weapon upgrade, which will be applied to Blood-/Titanbane weapons for now.
- Newly created BB/TB weapons will have 0/6 Star upgrades and will be much weaker than the previously created weapons, but you will not need any weapon tokens to create it.
- Star upgrades require certain items to be sacrificed for the weapon to get stronger.
- In case of BB/TB: You need to sacrifice the weapon tokens and your weapon will get stronger again, until you reached 6/6 star upgrades and unlocked the true potential of your weapon. 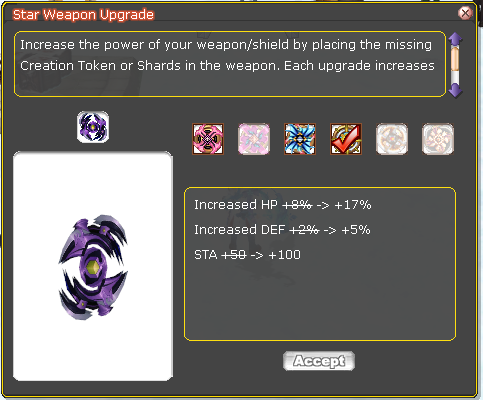 - This allows for a more steady progression path, allowing for a smoother weapon creation and upgrading experience that can be chopped up into smaller steps, rather than being forced to farm 6 Weapon Token before having a usable weapon.
- This factually does not change the powerlevel of Blood-/Titanbane Weapons.

Altered Item Versions
- Added "Altered" versions of the Lv. 135 sets.
-- These sets are damage oriented versions of the 135 sets, that are here to be used as an additional option instead of many classes jumping from a 125 set directly to a blessed/cursed damage set
- Removed "Celestial Edge Exchange" and "Knuckle Exchange" and replaced it with "Alternate Version Exchange" at [Exchange] Reonan
-- As the name suggests, items that have an alternate version can now be exchanged through this option
-- You can use this menu to exchange your Lv. 135 parts for the "Altered" versions
-- Specific exchange restrictions still apply and are outlined in the info box
-- Knuckles: Retain all upgrades, awakes and effects in general
-- Celestial Edge: Retains all upgrades, re-rolls the random stats on the resulting Sky Striker
-- "Altered" Lv. 135 parts: Remove all upgrades, awakes etc. Creates a completely new item
- Updated Cursed/Blessed Set Part exchange to allow for the use of "Altered" Lv. 135 set parts